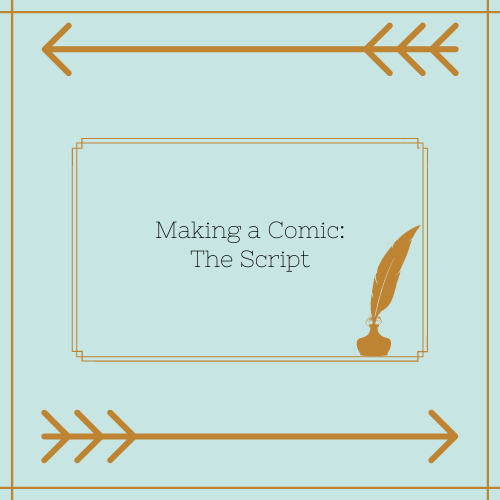 I’ve been working in the field for about half a year now so I’ve decided to write out my experience for others who might be interested in testing their hand at the world of webcomics. In part 1 of this short series I’ll be discussing the script format and what I use to write. Think of this like a crash course in webcomic making. It won’t be a “step 1, 2, 3” in-depth walkthrough. I hope you enjoy!

Writing in script format is something that’s always been difficult for me. Scripts don’t have the same amount of descriptions you might be used to when writing stories, whether they be non-fiction, short story, flash fiction, whichever. This was a big adjustment at first, especially when I was just starting to work with an artist. I wasn’t sure how much detail they would need vs how much was too much (i.e. muddling the script and unneeded). I learned my groove after about the first month to two months of working with my artist, and this was key for me. Once you learn more about who you’re working with you’ll also learn about what they’ll need in terms of details and descriptions; this will help shape the length of your scripts. Now, I’ll sometimes have three or four lines or as little as one line. This is because it’s a brief look into the character or what’s happening in that scene. These will sometimes include descriptions for panel layout such as an overlaying panel on top of a larger one. I only do this when I have a very clear idea about how I want a scene to look, otherwise, I’ll let my artist lay the scene out with the details given and we’ll go from there.

For writing, I use an application called Scrivener. I absolutely love Scrivener and use it for any type of writing I do whether it be a short story, a novel, a comic, or my (poor) attempts at poetry. The application keeps me organized and always has everything laid out from the moment I open it so I don’t have to do any pre-prep work, I can just dive right in. While it’s not a necessity to writing, it makes the process more fluid. If you aren’t able to get ahold of something like Scrivener, all you really need to get started in script writing is something like Microsoft Word or Pages; even a pen and paper will do.
* I’ll do a longer post on Scrivener vs other applications in the future.

For the layout, check out the picture I’ve attached below, it’ll help with how you should layout your own script for ease of reading. The script is for an old episode my comic Zodiac Life. You can find the link to the episode here.

That wraps up the first part in the Working On A Comic series. I hope you found this helpful, especially if you’re just starting out in the webcomic world. Part 2 will be out next week and will focus on finding an artist for your comic.

Check out the most recent adventures!

Support me on Ko-Fi